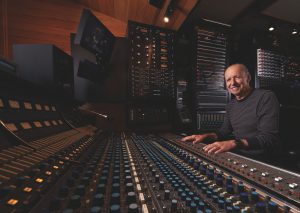 – Eye on GUY CHARBONNEAU.  For more than 40 years Guy Charbonneau has recorded and mixed projects for an exceptionally wide range of talent within the music, television and motion-picture industries. His passion for recording live music remains unparalleled and fuels his drive for capturing a clear, pristine, authentic sound every time. And it is this approach, or attention to detail that has really allowed him to remain as one of pro-audio’s foremost sound engineers on the scene today. “I believe that our ability to interpret many diverse types of music while consistently capturing the true ambience of a live event makes Le Mobile a unique and invaluable asset to any recording project” says Charbonneau who then looks straight at me while adding: “You know, there is this integrity of sound that I am always going for and trying to preserve…its very hard to explain, but in the end I recognize it when I’ve been able to achieve it…but it is also this feeling that I have of always wanting to capture the artist in the best possible way, in the very purest form and this makes me approach every project as if it is the most important one in the world…because at that moment it really is.”

In recognition of his long and prestigious career in live remote recordings, production and mixing, numerous industry awards have followed. Among these are: Mix magazine’s highly coveted TEC/Technical Excellence & Creativity Award in the category of Outstanding Institutional Achievement for Remote Location Recording Engineer, an Emmy® at the 52nd Annual Creative Arts Awards, and close to 50 gold and platinum records to name just a few. But what also makes Charbonneau unique is his perspective which is vast and spans more than four decades. And when you combine this with a remote recording studio that is pioneering on the technology front, you get a legendary product. When asked about this he just laughed and said: “Well, given the complexity of today’s multimedia projects, I have to say that I am a strong believer in a team approach because a solid team is what it often takes to make things come together and flow smoothly and in the way that they should. But I do think with our decades of experience in recording and mixing live events from around the world — which by the way has included the music for many feature films as well with large orchestras– we really do understand something about what it takes to plan, execute and post-produce virtually any type of audio or video event in a way that completely honors the artists and the project. And in fact, I think we are extremely well positioned to do this because we have numerous options we can use starting with our exceptionally equipped truck, or our state-of-the-art fully customizable portable systems…so in the end its all about the music and it is win win.”