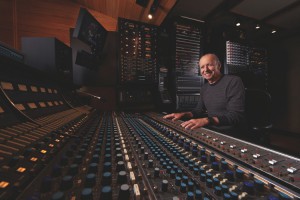 Industry awards soon followed in recognition of Charbonneau’s long and prestigious career in live remote recordings, production and mixing. Guy has received Mix magazine’s coveted TEC/Technical Excellence & Creativity Award in the category of Outstanding Institutional Achievement, Remote/Location Recording Engineer. He was awarded an Emmy® at the 52nd Annual Creative Arts Awards for his TV productions. Over the years, Guy has developed an unsurpassed style that allows the ambience of a live environment to be recorded without having to re-create it later in a studio environment.With a perspective that spans more than three decades, Guy Charbonneau is uniquely positioned to bring a wealth of hands-on experience to any audio or video production via his Le Mobile production. “Given the complexity of today’s multimedia projects,” the seasoned veteran offers with a knowing grin, “I firmly believe in The Team Approach. With many years experience of recording live events around the world we know what it takes to plan, execute and post-produce any type of audio or video event using either our full-equipped truck or state-of-the-art portable systems.”

During the past 35+ years Guy Charbonneau has recorded and mixed productions for a wide range of talent within the music, TV and motion-picture industries. His reputation for clean, pristine sound quality, and his world-renowned experience of working within the music industry, ensures that Guy remains one of pro-audio’s foremost sound engineers. “Our ability to interpret diverse types of music and constantly capture the ambience of a live event,” he concedes, “makes Le Mobile an invaluable asset to any recording project.” In addition to keeping Le Mobile one step ahead of his clients needs, Guy’s passion for recording music remains unparalleled.

Le Mobile’s team approach is evident from recent productions. Guy recorded No Doubt’s Rock Steady tour in Long Beach, CA, and then mixed the project for stereo video and 5.1 DVD release. He did the same for The Pretenders’ Loose in L.A. DVD. For country superstar Kenny Chesney, Le Mobile traveled to Knoxville, TN, for tracking of his Back Where I Come From Party. When the truck returned to its home base in California, Charbonneau handled the stereo mix for a CMT broadcast, as well as premixing for a 5.1 DVD release. He recorded and mixed 12 tracks from the 2007 and 16 tracks from the 2010 Crossroads Music Festival, which featured over 20 of the world’s greatest guitar players. He also recorded/mixed the live recordings of Gwen Stefani’s Harajuku Girls Lovers Live, as well as her forthcoming Sweet Escape Live DVD.

“The surround mix is exciting and multi-dimensional, and it sets a standard I wish most concert DVD mixers would follow. The crowd noise in the rear speakers actually sounds as if it was recorded from the back of the hall (rather than at the front, perspective simply mixed to the rear), which truly puts the listener in the center of the auditorium. Then, the ambient mix is EQ’d to bring out the sharp timbres of the guitars, cymbals, and vocals—you actually hear the sounds decay and snap in the back of the room. Crank everything up, and it really seems as if you’re at L.A.’s Wiltern Theatre grooving to the band.”
Michael Molenda, Guitar Players Magazine about the Pretenders Loose In LA DVD

“There is more to Guy then you could ever discover in one sitting… His demeanor, attitude and charisma provide for a most enjoyable experience … I have not only worked with, but learned and absorbed a great deal in my time spent with him….. I cannot recommend him more.”
”Joel Singer, Lead Engineer, Mix Music Mobile

“Guy is one of the most highly regarded engineers for live tracking and mix down production in the business. He was one of the first to bring the highest end studio gear into the recording process of capturing concert sound. He hand built and outfitted a luxury semi truck to house the studio which maintains functional accustical involvement with a physical comfortablity that blends into genius. He was one of the pioneers to accomplish quality and mobility, and still remain in the upper echelon of audio engineering today. As with great minds and extreme intelligence, he is quirky an eccentric in many ways, and sometimes leaves people scratching their heads, but one can never doubt his professionalism. It’s never a boring experience with Guy.”
Becky Wilson, Monitor engineer the Bangles, Rebecca Wilson Productions.

“Guy is one of the finest engineers that has ever worked on my truck. He is with out a doubt one of the top engineers for location recording in the country. Guy’s mobile unit “Le Mobile” is also at the top of its field as one of the finest audio truck on the west coast. The term Sonic Integrity best describes Guy.”
Kooster McAllister, Chief Engineer / Owner, Record Plant Remote

“Guy is simply the best audio engineer in the world! I have worked with him for more than 15 years on lots of major projects from New Orleans Jazz Festival to a Gospel recording in San Francisco and everytime his work is simply amazing. He is the best live mixer there is bar none. His recording truck puts out an unbelievable sound and headroom that is second to none. Check out his credits it is literarlly the biggest artist of the past century. What’s more amzing to me is that is the nicest guy you will ever want to meet. A true team player with the goal of win-win for all his clients. If you are privileged to work with such a incredible artists you too will know what I mean. Guy is simply the best!”
Carey Goin hired Guy as a Audio Production

“When it comes to capturing live music events Guy is at the top. His work over the years at the Coachella Festival has a reassuring professionalism to both the festival owners and the artist participants with everyone’s integrity and expression remaining intact.”
Tom Carolan, Owner, J Rae Entertainment